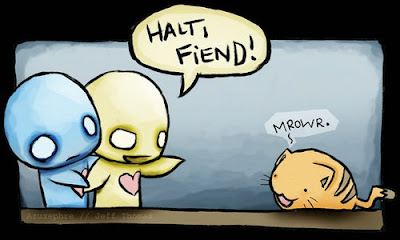 "You just don't look like you don't club", "You're kidding, right?", " Oh my Gosh, you're geekier than I thought you were".... These are the very "encouraging" comments that I've gotten..

The thing is I don't see what so fun about clubbing - honestly I think it's a meat market. Guys, if you're looking for a one night stand yea maybe thats the right place, but if you're looking for something long term, chances are slim. Well, not impossible -- but slim. I've heard of cases where people meet in clubs, hook up and live happily ever after (at least for now).

I'm just not the kind that enjoys music blaring in my ears and dancing with some random guy (not unless he is uber cute, OK I'm kidding). If I ever consider going, it'd be with my girlfriends, just having fun over drinks and letting loose. But yea, I enjoy mango tango, wala, wine bar, harry's, cafe iguana etc, where you can have a decent conversation with someone else without having to fight with the music to be heard... at least at such places you can see a friend's face and not some glow from their eyes and teeth from the black lighting...

Yea so call me square, I don't care.

So kenneth brought me to Zouk today because he thought he wanted to expose me. So of course excuse was to chill at wine bar, but I could have guessed that we would enter. I met my girlfriends there, Esther, Dinky, YY, and a couple of Kenneth's hot chick gfs. The thing about going overseas is that you get to know all the HAWT babes, I guess. Of course I got to meet the mama shop gang from AC, arun, kaveh, yijian, ivan and well, the likes. Ben Fu was there *no surprise* and the best part apart from Kenneth showing me around was meeting Liang Ming and Ziyi! Horror, got gfs still want to sleaze girls... No la, they were having fun, and they were faithful, no worries. I asked Ziyi why he didn't bring his gf, he said " come this type of place of course don't bring gf!". I cringed and giggled it off. But, no la, he is the kind of guy that can trust one... :)

What did I think about Zouk? Actually, it was pretty OK, Music was OK, Phuture was toooo loud but velvet was nice. At least can hear what someone else is saying.

Bottom line, well, I still rather be a geek at chill at good ol' Harry's. Jazz plus a nice magurita.. nothing beats that. It's really the company that matters... :) Plus I'm a nerd, so screw the world!
Posted by eStee at 9:53 AM

Which Harry's are you at? I am always at Harry's too.

ahhh, so thats where you went after.. no wonder u met YY..

How many people actually walk into a club because of music? I mean, seriously a music hunter... Most of the time it's all due to booze and girls, and for girls they have the carrots of course.

Many people love to say they go clubbing because they like the "atmosphere"... what atmosphere? When their eyes are only on the female contours, what "atmosphere" are they talking about? I guess many of us working in entertainment, we know it all too well. Many just hate to admit the fact that they go clubbing "to feel part of the group".

I totally agree with et. Its only for the booze and girls.

Don't worry, I'm a self-confessed geek too. You should make a 9eek club for all 9eekers. Hehehe

You went for Mambo night? Must have been amused when you saw those guys on the platform doing the hand movements ya?

I remember those days as well...

estee, that is a surprise for me too cos my impression you is that you go clubbing :)

I guess once it is awhile it is pretty fun. for me i enjoy watching the sign language performance at mambo.

I guess clubbing is just another form of networking and people go to see and be seen. :)

i guess looks can be deceiving huh :P

bjorn: u popular la -- everyone loves u!

sj, daphne, astro: i really am not a clubber.. for some reason i give out the wrong vibes, which honestly makes me feel damn lousy 4 some reason. people need to know me b4 they judge, I guess...

Been to Zouk exactly once myself ... went there as I was helping to arrange the school bash there. So as you can tell, not a clubbing person myself ... though my being a 9eek has absolutely nothing to do with me being the non-clubbing kind ... don't label 9eeks as non-clubbers! We are cool folks too! =P

Here's my theory: Loud music's just a conspiracy / excuse for guys to get really close to gals.

Haha! Same here. I get the same kind of comments regarding clubbing and only went to Zouk for my first time 6 months ago despite being 23.

haha estee i guess u are right. I guess in a non-ideal world where by you may not get to know another person, sometime first impression is a necessary protection mechanism i guess :)

Indeed...screw the world (that hates the likes of us)
I love this post; I dun club but I am no geek either (ok, mabbe just a wee bit geek-ier than my frenz)
I love jazz and I rather chill with a bunch of good frenz.

I respect u fer being convicted of wat u believe in and just being yourself.

Adult Entertainment Great online blog for entertainment especially for those boring raining days when you are stuck inside ! Keep up the good work!