GLASGOW, Scotland (CNN) -- Smoke billowed out of the main terminal at Glasgow airport and witnesses spoke of fleeing after a driver tried to ram a burning four-wheel-drive vehicle drove inside the building.

Witnesses reported a man driving the blazing Jeep Cherokee vehicle into the departures section of the main terminal of the airport Saturday afternoon.

The roads around the airport were choked with traffic following the incident, Britain's Press Association reporter.

One eyewitness at the airport Saturday, Jim Manson, told British TV he saw a car that appeared to be a Land Rover "with a couple of guys in it trying to push their way into the airport terminal building."

He said the vehicle "suddenly caught fire" and "what was really odd" is that one of the people tried to open up the back of the car while he was on fire.

"It was very, very dramatic," Manson said, explaining that flames shot out from the front of the car, and then a mini-explosion appeared to occur.

Flames shot upward, and the front of the terminal building appeared to catch fire, he said.

"Everyone just ran," Manson said. "We're absolutely terrified, you can imagine. The first thing on all our minds was: Is there an accident? Is there a terrorist attack?"

One witness told Sky News that a man had scuffled with police immediately after the incident and had been wrestled to the ground.

"There was chaos at the airport," said the witness, James Edgar. "I was in the airport building trying to book a holiday. Suddenly people were running past us. Suddenly everyone said to get out of the airport."

Edgar said people began running outside "with panic in their eyes."

He said there was confusion and some anger among passengers. Edgar said security guards tried to put the fire out extinguishers.

Lynsey McBean, 26, from Erskine, Renfrewshire, was due to fly out to Canada and witnessed the incident from yards away. "We got there about 3 o'clock, just as it happened," she told PA.

"My boyfriend was unloading golf clubs and we saw a green Cherokee drive straight into the front door of the airport but it got jammed. They were obviously trying to get it further inside the airport as the wheels were spinning and smoke was coming from them.

"One of the men, I think it was the driver, brought out a plastic petrol canister and poured it under the car. He then set light to it. At that point a policeman came over, the passenger got out of the car and punched him. At that point I began to run away.

"But when I looked back several people had run over to try and stop the men, who were Asian. I could see that one of the men was on fire. All of our party then ran to the back of the car park and saw what looked liked thousands of people rushing out of the airport."

Another witness, John Coutts, had just arrived in Glasgow from holiday in Alicante with his wife, Sadie, when the incident happened.

"We saw a lot of smoke and then we saw the guy being led away in handcuffs," he told PA.

Another witness reported that the vehicle appeared to explode into flames almost immediately after crashing into the building.

"The jeep is completely on fire and it exploded not long after. It exploded at the entrance to the terminal," witness Stephen Clarkson told the BBC. "It may have been an explosion of petrol in the tank because it was not a massive explosion."

Passengers fled running and screaming from the busy terminal, Margaret Hughes told the BBC. "There was black smoke gushing out where the car had obviously been driven into the airport," she said.

Another eyewitness told the BBC that one of the men led away from the four-wheel drive
vehicle appeared to be "smoldering."

"I saw two guys walking away with the police. One had his face covered and another was, dare I say it, smoldering," the eyewitness said.

The eyewitness said he was upstairs, directly above the terminal entrance where the car crashed in.

"The fire alarm went off, people stood up and thought 'Is this a drill?.'"This green jeep was in the middle of a doorway burning."


The incident comes with the UK already on alert for terror attacks a day after two cars loaded with explosives were discovered in London. 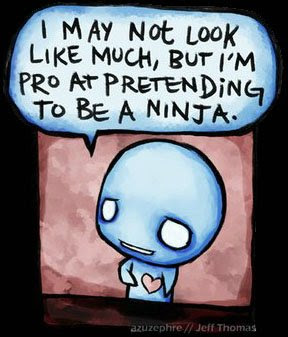 I'v always believed that we all have a ninja within. It saddens me deeply, all the bombings and the great loss of innocent lives. just as we grieve over the passing of one terrorist attack in one part of the world, we soon find ourselves face to face with yet another.

Everyone, in my opinion has a ninja within. This ninja is capable of doing extreme good and also extreme evil. This ninja lies dormant until it is presented with an opportune moment to manifest itself. The bad ninja comes out in anger, in hate and the good ninja comes out in times of kindness, joy and altruism. The more one ninja is used, the more it gets to practice its skills. And likewise, the less one ninja gets used, like muscles, they start to wither away if not in use.

What would push one to commit the act of terrorism? Suicide bombers are not mentally ill or unhinged, but acting rationally in pursuit of the 'benefits' they perceive from being part of a strict and close-knit religious enterprise. Suicide bombers are thus motivated by a “simple cost-benefit analysis”, in which the 'benefits' of self-destruction outweigh the cost. The benefits are perceived by the terrorist to be so great — in terms of membership of the group, achievement of collective goals, the promise of benefits in the after-life, and so on — that they outweigh the cost.

In this instance, the bad ninja has won the war, but alls not lost. Look at people like Mother Theresa, Gandhi, Abraham Lincoln, Aung San Su-Chi and John Wesley Powell. There still is hope for the good ninja to emerge victorious.

Have you done your part today yet?

The voice of people dying in Africa is still resonating in my ears, and the image of people eating bark to live sticks in my mind:

Are we trading lives for lives?

There is an article in about.com, telling us how Islam forbids suicide, quoting many verses from Qur'an, and there is an article published by BBC in 2001, talking about how schools were built to train 13-15 year old kids to live a life of killing. Learning how to suicide. I feel sick when I realized In that society a woman, a wife, who can't have kids is considered worthless.

According to Wide Angle, Suicide Bombing started as early as 1983 and As all major religions forbid suicide, religiously motivated groups always express the motives of suicide bombers in "altruistic" terms; also, all terror groups, religious or not, wish to project strength. Thus, the personal motives of suicide bombers are often concealed. In one notable example, widely reported in the Israeli press, the first female Hamas suicide bomber -- a young mother of two -- was allegedly having an extramarital affair; killing herself and several Israelis was said to be the only way she could redeem her name.

The suicide bomber, 22-year-old Saeed Hotary, a Jordanian who had been living in Kalkilya.

"I am very happy and proud of what my son did and I hope all the men of Palestine and Jordan would do the same,'' Saeed's father Hassan told The Associated Press.

I really love a place filled with love and peace, but that's far too perfect, for now we need to take firm steps together to let the world realize there is such a place where people cannot live a normal life.