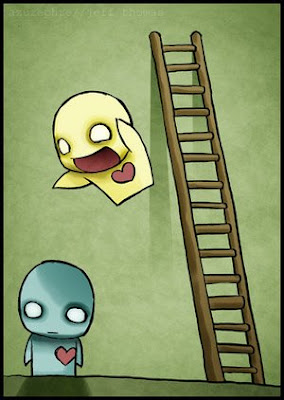 KABUL : The Afghan government confirmed that Taliban militants holding 23 South Koreans had killed one of their captives on Wednesday.

When I read this article, I can only think of one picture. This is the picture of someone free falling. Free falling and unable to break his fall. Plunging head over heels - down and down into a bottomless pit. Head over heels, accelerating at an alarming rate.


2 countries, pushed to a corner not knowing a better way to seek revenge, but to kill more innocent lives. I don't mean to be angry, but I am furious. I want to scream at them. Why would taking someone else's life bring anyone joy?

"We call on the South Korean government, parliament and its people to pressure the Afghan government to accept our demands or we'll kill more hostages after the deadline passes," Ahmadi added.

It's funny how we are all one people, just different race and religion, but we act like we're from different planets. So much hate in that statement, it hurts.

Will the world ever be at peace, I ask myself. We will ever learn to love each other, forget our wrongdoings and live together amicably, "under one roof"?

"If our demands are not met we'll kill some more hostages," Ahmadi told AFP.

How do we show them that an eye for an eye makes the whole world blind?
Posted by eStee at 11:03 AM

And if they organize an operation to shoot down the people holding the South Koreans hostage, some others will say that that was cheap, that's not the way, always negotiate...

Sorry Estee. Sorry to tell you that the world is getting darker. More cruel, more evil, more twisted.

Unless you can say that for any given moment, you personally have no qualms or feel indignant against another human being, then there'll be world peace.

We cannot ask others to be tolerant of others when we ourselves aren't tolerant of everyone. :)

Oooh. Nice one there sicarii

Just the very basic principle of why I think there'll never ever be world peace, really.

Because deep down we humans just can't get along with everyone... sad but true.