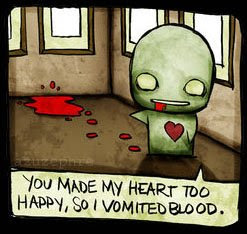 Sometimes, we say the wrong words, at the right time. Sometimes, it's the right words at the wrong time. Whatever it is, things just fall apart.

I remember falling out with my ex-best friend in secondary school. Thinking about it makes me sad, but like I said, sometimes after things have been said and done, we reach a point of no return..

It's sad story, but I guess maybe there is something I can take home from it. The only fear is that it will happen again, and happen unknowingly...

Best friend X was dating a guy about 17 years older than her. He had a child almost about her age. It was hard for me to fathom, as a 15 year old young secondary school girl, which could be why I handled the situation so badly.

We were going to hang out one weekend with another girlfriend of ours and friend X wanted to bring her boyfriend along. I wasn't too happy about it and thought that it would be a nice girls outing, and wasn't comfortable with him along.

I guess the way I put it came across very harshly, I don't remember the words I said per se, but it was something to the effect of "I don't think we want him along". I guess I was insensitive because it sent across the wrong message that I was not being supportive and it was taken to be mean and cold.

I don't remember what I was thinking at that time, just that I didn't want him along - period. Friend X said that we knew that it was the only time she could go out with him (without her mother snooping?) and I guess she truly cared for us to know the person she was seeing.

Thinking back, I don't know how I could have made the situation better. Maybe it was an accident waiting to happen. Perhaps I could have been more sensitive. I was 15 years old, and then and there I experience my first break down in friendship. I had lost my best friend. I don't recall what happened after but I knew things were never the same again. I was hurt and I remember crying over it several times (but never letting her know). My beautiful bubble had burst, and I didn't know how to mend things.

What could have I done differently to right things? All the what ifs and whys... I try not to think about it much, but some morning it creeps back to me. it's been 9 years since it happens, but once a while I remember friend X and I'm filled with regret, but am equally confused.

What could I have done differently? Who can help me turn back time?
Posted by eStee at 5:50 PM

The thing is, nobody can turn back time. It sounds absurb to me, that at a young 15 years old is dating a man 17 years older though. At that gullible age, how many of us actually knew what love is?

Sometimes, the right words at the right time are still not enough for some. Truth hurts, you know right?

the truth always here, but a lie hurts more in the long term right?

What if the truth is a lie?

then the world would cease to exist if we mere mortals stop recognising one from another..