Floorplay... a twist on the word "foreplay"? Maybe, perhaps. Imagine, it’s cheesy, for sure, but there is no denying that FloorPlay is taking the world by storm.

I loved the experience, we were so close to stage and I tell you one thing for sure, if you expect to see hot bodies steaming with sex appeal, what you wish for is what you will get. The LAYdeeess were va-va-voom, gyrating their hips, in skin tight costumes, men were HOT HOT HOT. In tight tanks, 3 sizes too small pants plus some scenes featured them half naked! (sorry, unfortunately the wrong half - pants were on, laydees!) The way they moved to the beat of the music, their passion in each dance step and their expressions on their faces were really captivating. 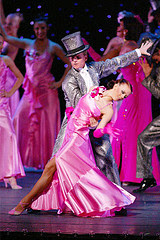 To be honest, I never really took much interest in dance, to me, it's really for people who are really fit and who have the sense of rhythm - something I won't dare boast of - but just watching them made me realise that U didn't need to perform this art to appreciate it!

Half way, Junkang actually said to me, "I bet these people are really good in bed, can you imagine?" --- Errr, yes I can but I would not like to, hun :) ... But seriously, their booties by itself were works of art. TIGHT ASSES and ROCK SOLID ABS. *drool* 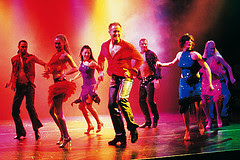 The show oozes hot, steamy sex appeal with its outrageously gorgeous set of 20 guys and gals who mooch their way through waltzes, gyrate at breakneck speed to the Lindy Hop, and don jeans for street-style funk grooves. Created by Australian choreographer and ex-world ballroom champion Jason Gilkison, FloorPlay has cleverly chosen to minimise the feathers and coverall costumes of traditional ballroom styles. 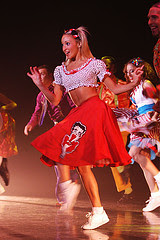 Instead, it leverages the current popularity of Latin beats and the sensual, body-shimmying dance styles of samba, salsa, cha-cha and rumba. The paso doble, with cape-wielding matadors and strutting señoritas, is superbly choreographed and takes this standard of the ballroom repertoire to a fresh new level. Throw in the tango, with its scintillating innuendos combined with precise head tosses, and the show is set to please dance afi cionados everywhere. Interestingly, the original Burn the Floor concept emerged from a stunning display of Latin dancing at Elton John’s 50th birthday bash. That show went on to tour 15 countries, and the new FloorPlay is an extension of the idea that’s appealing not just to the uninitiated, but also to ardent dance lovers who appreciate an exceptional showcase of quality moves. Going by the current popularity of reality TV dance shows like So You Think You Can Dance from the US and the Singaporean equivalent The Dance Floor, ballroom dancing and all forms of dance are clearly enjoying a renaissance – one which this sure-to-be-entertaining performance is most definitely capitalising on.

Thank to TimeOut for article.
Posted by eStee at 1:13 PM