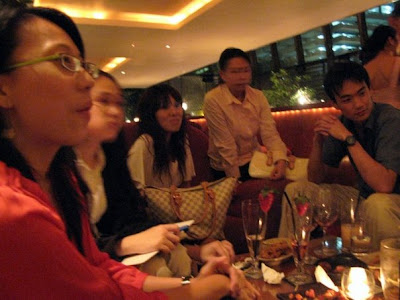 Last night, I had great fun at the HP Mini Note Book PC Showcase for bloggers. It was held at the Grand Hyatt @ Mezza9. It's always great seeing familiar faces within the crowd and so many fellow Pingsters and Nuffnangers. 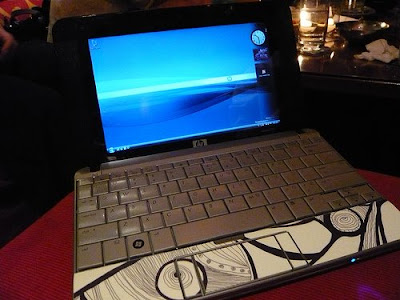 What do I think about HP's latest addition to the family? Say hi to Miss. HP 2133 Mini-Note PC. How do you think she looks? Well, I can't really compare to anything except the Asus Eee I guess, since they have something as bite-sized at the above. This PC has the Windows Vista edition as well as the Linux one, so user can choose between both.

Despite its diminutive size, it’s amazing how the mid-range and more expensive models manage to pack in 120 to 160 GB HDDs which is a huge difference especially when compared to the Eee. Not to mention, the Mini-Note looks more sturdy and sophisticated with its anodized aluminum shell. 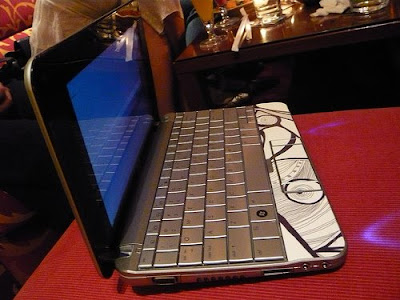 I had a hard time convincing the HP people that although I used a Macbook, I wasn't one of those cultish MacBee lovers. I could appreciate any non Mac PC as well, but they just broke off laughing. 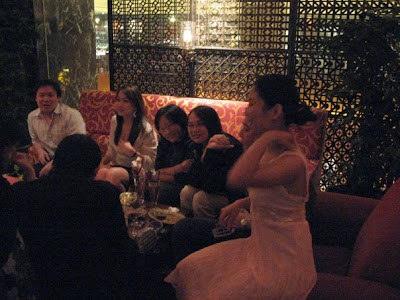 (Eligible but not so single anymore!!!!! Sorry girls!) 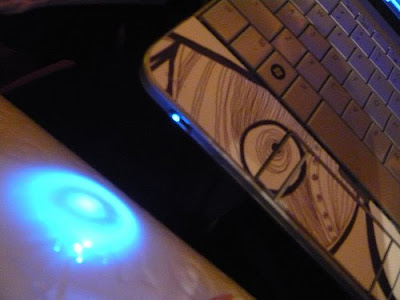 Mike Cheng, or whoever was it, kept shining the light from the PC at me. Dang it's really bright man... (or perhaps it wasn't mike and Im just trying to pick on him-- I can't remember after all the food and drinks!) *update- the culprit was Coleman Yee!!! I remember now argh!, sorry mike!* 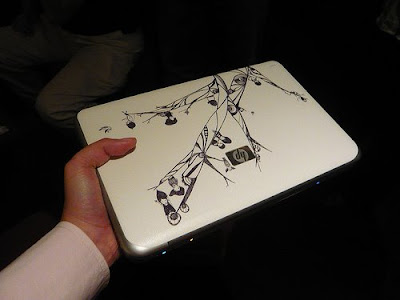 It fits squarely in the hand, but upon first holding it, I thought that it was pretty heavy, but was told that this was due to the extra battery pack attached -- The original is a 3 cell battery which causes it to weight 1.19kg and can last slightly over 2 hours. (I still wish it was lighter though, I know, I'm demanding) 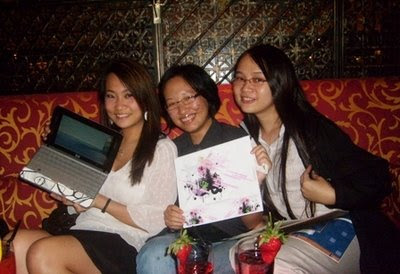 Comparing to the Asus, I hear can last about 3 hours. The Asus Eee I must say is cheaper than the HP one which comes in at about $999. The highest end model of the HP mini notebook, with all it's external additions, will actually cost as much as a full sized notebook, I figure. But those who are looking for something lightweight and pretty to carry around -- this would be good as it's form factor outshines the Asus Eee by quite a margin.

Aren't the skins pretty? Hey, we need clothes, but so do our PCs ok! This chick comes with a respectable 160gb hard drive. It comes with wireless 802.11a, b and g as well as Bluetooth! Speakers wise, this girl can seriously pack in the oomph. The speakers were loud and pretty audible for it's size. Reminds me of a little chilli padi chick petite in size but can bark super loud! However, if you're really into music, you'll prefer headphones, I guess. 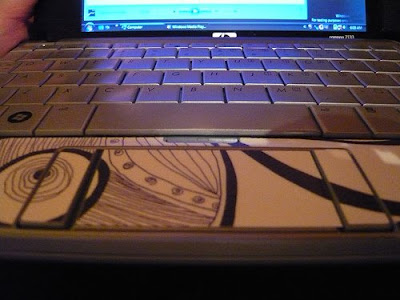 I hear the keypad is over 90% the size of a normal notebook, which is great so you won't feel so cramped up when typing... however, the touchpad has it's right and left click located beside the pad, instead of below it. I got used to that pretty fast, perhaps I was pretty excited when Nicole was explaining to me how to use the Linux version so I wanted very much to operate it. 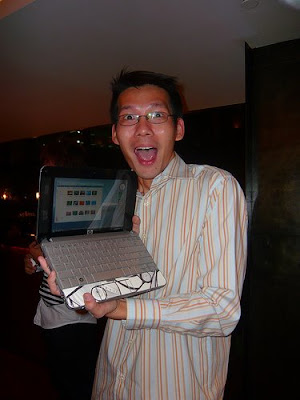 Melvin trying happily to steal one away.... no but really thanks to him for the invite to this event! 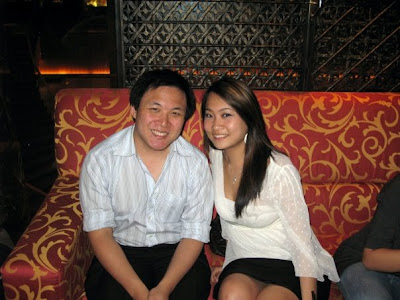 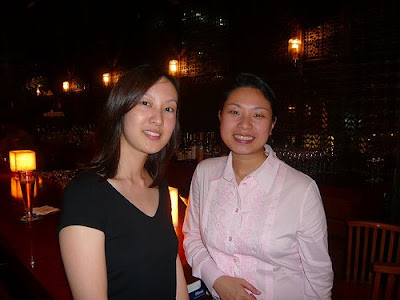 And it was definitely good to meet up with Vanessa again. (pictured with a HP rep, Madeleine)!

I really wouldn't mind this little chick mini notebook, but due to my budget constraints, I'll probably have to wait until I start working to buy one. I'm happy with my Mac but hey, sometimes I find it a bit heavy, especially if I sling it on my shoulder....

Yes darlings, if you were wondering, Miss HP Mini-notebook reaches our shores Mid May. 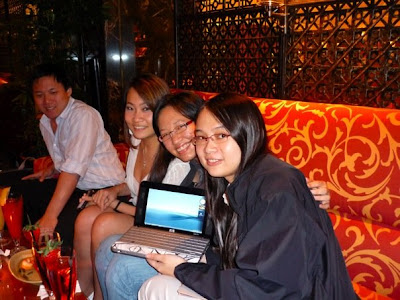 Nice! Looks like it could be a good travel or school laptop!

why why why do PR folk not invite other PR folk to their events?

i like geekery too.. and it just means i won't be getting invited to all the parties that all of you get invited too.. *hai hai hai*

Sell the old to buy the new?

hey estee, nice pic of you and Ming there :)

Brian: I know I know, I think you would totally love the event. I feel your pain, bro!!!!

Hillary: Sell the old? I got very sentimental relationship with my maccckkyy!

@Brian, Organise your own lah. Or go work somewhere else. hahaha.

But that's my take.

ben: Yah brian can organize a social media lunch or something. :) haha then u can sponsor food!!! :) We'll see how things play out for HP then!

where did u get the skin?
looks real cool!

Hi Nice Blog .laptop battery hp Fujitsu, Gateway: Dell holds a very strong reputation in laptops marketplace. Dell’s Inspired series of laptops is very popular among students and those who are looking for a wide variety of features in a limited budget.

There are alternatives to a mini notebbok pc too. Several alternatives are mentioned at:
http://www.mininotebookpc.info

Generic Viagra (sildenafil citrate; brand names include: Aphrodil / Edegra / Erasmo / Penegra / Revatio / Supra / Zwagra) is an effective treatment for erectile dysfunction regardless of the cause or duration of the problem or the age of the patient.
Sildenafil Citrate is the active ingredient used to treat erectile dysfunction (impotence) in men. It can help men who have erectile dysfunction get and sustain an erection when they are sexually excited.
Generic Viagra is manufactured in accordance with World Health Organization standards and guidelines (WHO-GMP). Also you can find on our sites.
Generic [url=http://viagra.deutafilm.ru]buy generic viagra online in canada[/url] is made with thorough reverse engineering for the sildenafil citrate molecule - a totally different process of making sildenafil and its reaction. That is why it takes effect in 15 minutes compared to other drugs which take 30-40 minutes to take effect.
[b]mexico and viagra and price
can you take viagra with achohol
how to stop viagra spam
Viagra Age Range
lloyds pharmacy viagra
Risks Viagra
luxury hotel rome viagra sales online
[/b]
Even in the most sexually liberated and self-satisfied of nations, many people still yearn to burn more, to feel ready for bedding no matter what the clock says and to desire their partner of 23 years as much as they did when their love was brand new.
The market is saturated with books on how to revive a flagging libido or spice up monotonous sex, and sex therapists say “lack of desire” is one of the most common complaints they hear from patients, particularly women.

Disabling startup items can help reduce the use of virtual memory, can increasing replacement battery life. The amount of drained battery life will be different for every user, since everyone has specific settings and external variables that will affect the battery for laptop life.
A good battery determinant of life can be achieved most sought-milliamp hours. Each battery has two ratings, volts and milliamp-hours. Milliamp hours usually expressed by persons, a description of the expected battery power. The higher ranking is ma, the longer the laptop battery will last. When buying a replacement battery, the original battery voltage must comply with the replacement of the battery. The only exception to this is if the batteries are composed of different chemistries. Ni-MH and Li-ion batteries have different voltage ratings, even if they are exactly the same laptop.
It is a good idea to have a battery backup incase the laptop batteryp suddenly dies or loses its charge strength. Laptop users may choose to use battery until it dies completely, but it's a good idea to have replacement battery ready for use when your original battery only works in 30% of its original Runtime.

Nice! Looks like it could be a good travel or school laptop!

Sell the old to buy the new?

Wow, well done! This article is very useful for me. But now I want to talk about Leoch International, a manufacturer of lead acid battery, which supply ups battery, gel battery, vrla battery, and so on. Their automotive battery are very good, which are compatible with many models of cars. Besides, the golf cart batteries have several kinds of voltages to meet your demand.

thanks for your share,this is wireless site wireless backup camera

The Palestinian leader Mahmoud Abbas' recent drastic reorganization of the national security is one sign to this effect. E-papers are able to take advantage of story, sacrificing other, decidedly less important stories and giving as much detail about breaking news as possible. Such a benign amalgam is the only realistic hope for reconciliation. Sometimes local PR can attract better business for you than an article in Indian media. This also means that you trust those who have already used the products and know how they are used.

Hi there to all, for the reason that I am really eager of reading this blog's post to be updated regularly. It contains good data.

The Regional Animal Hospital in Yorba Linda is well equipped to handle
the emergencies. An image will help flesh out exactly what you’re trying to announce
while adding character, flavor and visual appeal to the document.

licitations with regards to making ones cachet that
is most certainly Talbots at present. Yet again, new advances and engineering make these
procedures rapid and helpful, and this cuts down on the value tremendously.

These lenses are employed for the duration of get in touch with fittings and dispensed to the sufferers free of charge
of cost.

Make sure to evenly cover your hair, especially the tips.
Amla is used in the preparation of a highly effective natural shampoo by
mixing 100 g each of amla, nuts and Shikakai soap in two quarts of water, the mixture
is boiled for half an hour to simmer and then can be used as
shampoo for one month for all hair treatment throughout the year.
It only leaves a lustrous sheath on the hair and gives it a beautiful look rather and the greasy effect that is
left by the usual hair oils. The remaining oil in the scalp for a day and then follow up with a shampoo the next
morning. Exactly what the oil does is clean and exfoliate your hair follicles,
help make your bloodstream circulate better all around your head and in return boosts the
process involving hair growth and acts as being a supercharger
for making your hair get bigger.

My web-site ... how to grow long hair