In my recent trip to Japan a couple of weeks ago, I imagined to be seeing girls in short skirts, automatic dispensers with soiled girl's underwear in it and tons of cosplay babes and hunks.

Was I disappointed with my trip?

Since my return from Japan, I've started to have an interest in this island.

One thing for sure I didn't see was the soiled underwear dispenser (and yes, if you were wondering, I was pretty darn disappointed!) But to my amazement, there were cigarette dispensers everywhere! 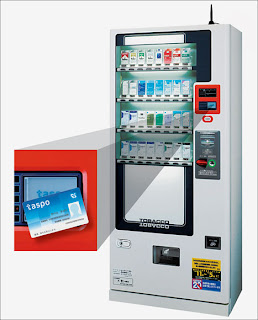 This shocked me quite a bit because knowing that the legal smoking age in Japan may be 20, schoolgirls in need of a nicotine fix should find easy workarounds. Vending machines can't tell if you're 16, so how can a country like this stop illegal underaged smoking and purchasing of cigarette packs?

The ubiquitous dispensers have long sold packs of Marlboros and Mild Sevens to anyone with the yen, and they never asked for ID — until now. Earlier this year, the Tobacco Institute of Japan began issuing "taspo" (short for "tobacco passport") age-verification cards, which must be scanned at newly installed smart vending machines before a purchase can be made.

The integrated circuit-embedded cards will also be equipped with an electronic money function that lets custo-mers buy stuff with a simple swipe. In keitai-crazy Japan, where phones can be used like credit cards, it shouldn't be long before taspo-capable mobiles begin to appear — for gals 20 and over.

High school girls will just have to find some other way to look cool and sophisticated -- and I don't mean anything to do with smoking.... 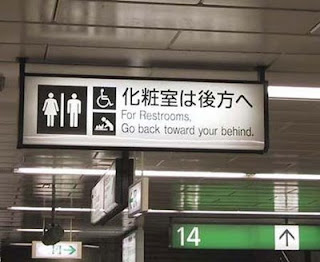 But really, I was simply Lost in Translation!
Posted by eStee at 11:34 AM

I saw the schoolgirls when I went a couple of years ago! Lots of them. Haha!

And yeah I was pretty amused by the cigarette machines too. They have vending machines for almost everything man

They have machines for everything! OMG... but then the school girls look generic. All heavy make up and layered clothes!!! Or perhaps it was cuz it was very cold when I was there!

But I guess it is worth the money going there, right? :D

alexandra: it was totally a culture shock, everyone dressed different... the conservative were conservative; but the wierd were oh my godish...

it was worth it, every bit of it. Perhaps it was also the company I was with there! :)

Daryl is right, they have vending machines for everything. Even hot coffee in cans. I saw vending machines that were practically on people's front porch of their house. It's funny too because you see Hollywood stars pushing products that you don't see in the USA. Like I saw Kevin Costner doing a cigarette ad.

On my previous trip I filmed this uber cool coffee vending machine that had cameras installed at every point of the process - bean grinding to chute opening, and you could see your coffee being made live. And then my dad or my bro deleted it. I was so pissed!

michael: they don't have vending machines for selling women yet, thanks God.

Farenelli: man that's so cool. Hey dammit which part of Japan were u at? I didnt see tt!

I love the movie "Lost In Translation". How did it leave you with the morbid impression, I wonder? I thought the movie showed that Tokyo was very modern with its bright neon lights and yet culturally very different from many of us. It inspired me enough to make 2 trips to Tokyo! :p

cobalt paladin: i don't know, it gave me a warped view. With the dirty dancing and the girl flashing herself to the guy she liked... just very paradoxic to the conservative japanese people I hear of.

I was walking through Shibuya the other day and a police officer shouted "stop you there" and grabbed a girl by the arm. The girl then suddenly pulled down her skirt and squatted like she was going to relieve herself or something. We kept on going and didn't really see where it went from there but it left alot more questions than answers.
We came to the conclusion that the girl was being accused of shoplifting and was trying to prove her innocence by showing she didn't have anything on her.
Shibuya has more than its share of strange characters, seriously I think they gather there.

the clothes for the school girl is just to appeal the eyes of others. and for the cigarette machine, i am sure there are electronic cigarettes are sold there.

Are you paying more than $5 / pack of cigs? I buy high quality cigarettes at Duty Free Depot and I'm saving over 60%.

VaporFi is the best electronic cigarettes provider out there.