This morning, I CRIED...

I count myself a very emotional person. I can cry very easily but the smallest things make me happy as well. This morning I received news of the passing of Uncle Desouza. It was just 3+ days ago that he was admitted into hospital and this morning. Details are vague but he suffered from a viral attack, when lead to the discovery of a blood clot in his lungs.. During the operation to remove the clot, somehow something happened and he didn't make it through the night. He slipped silently away into the arms of a higher being.

My parents have been trying to bring him and his wife to church for their attempts for the past 30 ish over years have not reaped any fruits. (This is not going to be a preachy-teachy blogpost, don't worry).

My mother called to tell me to tell me of the news this morning and told me my father was very sad and was crying. Her voice sounded crackled as well. I guess I understand the pain -- my dad had spent the last 30 ish years knowing Desouza and they have spent daily lunches together. Once in a while, we could all go out together for a meal or he would ever so often pop by my house when he was working with my dad. I think, my dad treated him as a very good friend. I mean, they had spent a huge amount of their lives knowing each other -- and I think they understood each other through and through.

Desouza was only 68. My dad and I just had a conversation about him on Sunday night, the night he was admitted into hospital. It's ironical. Inronically unfair.

When I heard the news, my heart sunk. I don't know why it did. I didn't know him that well or wasn't too close to him, but perhaps I was saddened by the wife he had left behind. Also I was sad at the fact that the people I cared about were sad. I absolutely hate it when the people I love are sad and the thought of that itself is enough to drive me to tears.

I found myself sobbing incessantly, as if some larger force had overcome me. The transcience of life. Doesn't it suck? As much as I tried to stop, I just couldn't and I logged on to MSN to attempt to speak with my sister. Perhaps she was one who could comfort me because she too, knew Desouza and although she was half a world away, it made me feel that someone understood.

I hate the passing of people. Absolutely.
But the tears kept flowing, and I had to hold my breathe to stop the sobbing -- I didn't want my eyes to swell up and nose to run like no tomorrow.

Then it hit me, how some small things can affect us the most. It it's all about riding on our misery in hope for better days ahead.

Perhaps sorrow may not be such a bad thing if through sorrow, we find inspiration for greater things.

Sometimes happiness is just so near, but our hands are soiled by memories of us doing wrong things. Our mind tells us we can't when, happiness is for everyone. We defeat ourselves before we even try.

People around tell us we can't; beat us down.... sometimes we have to learn to block out what the world says and listen to the music of our heart.

Learn to love ourselves for what we are and stop criticizing or targeting ourselves. Just for the littlest of mistakes. If you don't love yourself, who will?

It's time to take off that facade -- that just doesn't fit.

Or wish for something you don't have...

Or try to fit into someone else's shoes... just to please others, but not yourself... 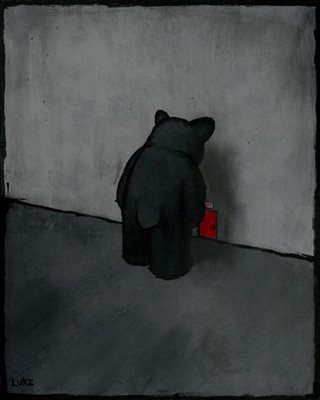 And don't try to find the exit in to your problems, sometimes the best is to face it, head on.

Dwelling in misery boxes noone up but yourself...

And locks you to your problems. LOCKS.

Poisoning your own thought with negativity never did anyone good. Rubbish in, rubbish out. And your load only gets heavier... and heavier, dragging you down... In the end you're your own prisoner, not anyone else's.

The solution may just sometimes lie in chopping off the source of the problem, although it hurts, being a bad relationship, a bad experience, or a bad ....

Pick yourself up, stop crying over spilt milk or miscarried dreams.

You can only achieve great things if you aim high....

This kinda detracted from a very sad post to something very uplifting. Perhaps because by some stroke of luck, while I was trying out this initially sad post, I came across these pictures and although they seemed at first to be unrelated to anything, I started to think about things in a brighter fashion.

Would like to leave you readers with a little clip, which made me laugh out loud. Perhaps life is better than I think it to be, and... there will be a pot of gold at the end of the rainbow.

o my. those pictures are kinda... disturbing. thank God i'm not a reader of age 6 :/

i was close to my granny when i was lots younger. it took me 4 years to accept that she died. lots of time. dwell in prayer estee.

am just not good at accepting losses. gonna shower. then finish 1 assignment i almost forgot to finish before saturday. aiYa!

"Sometimes happiness is just so near, but our hands are soiled by memories of us doing wrong things. Our mind tells us we can't when, happiness is for everyone. We defeat ourselves before we even try."

sam: hey babe, thanks for sharing your experience as well. Death can be something had to cope with... for sure

darrius: thanks, everything's back to normal now :)

dom: that post was supposed to cheer u up and let u see the pot of gold behind the rainbow!!!

And everybody hurts.... sometime.
Take care.

mole mole: :) yea perhaps sadness is something we relate to this week...

"Sometimes happiness is just so near, but our hands are soiled by memories of us doing wrong things"

These words gave me the most feelings.. very meaningful post with many I can relate to.. glad that I came across your blog.

The song by Aslyn provides a very fitting backdrop too. Nice song! Let it avail what it may, come what may... ^^

i was exceptionally sad when i saw the illustration of the rabbit cutting off it's own ear...it's so... sigh. when u r cutting yourself up, it muz be something reali hurting, hurtful...

jacen: thanks very much for your comment. Sometimes makes someone happy is the best solution to your own sadness :)

en en: I know it can be very painful but sometimes we have to stop listening to negative comments from us ... even cut off our own ears for our own good. I know its ironic...

life must go on..smile and cheer up :)

* where did you get those picture?