I was pleasantly surprised to be invited by Philips through Sabrina for this breakfast session. You know like many of these MNCs trying to "touch base" with bloggers, I thought it would be another session where basically they boasted to us what they had and try to force as much infomation down our throats, hoping in exchange for gifts, that we'd shameless blog and plug Philips.

So that morning, I had to painfully drag my self out of bed before 9 to ensure I made it to Vivicity's Courderoy cafe at 10... BUT it was all worth it.. they broke my expectations of my assumed very PR-ish gathering to a casual and very well planned out session.

Listen, these dudes like stayed up until 2am the night before and came at 8am that morning just to set the place up can?? *standing ovation*.. I was still rolling in my bed like an *oink OINK* then... 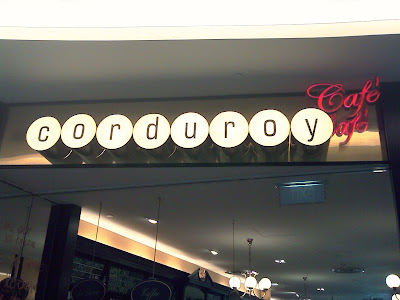 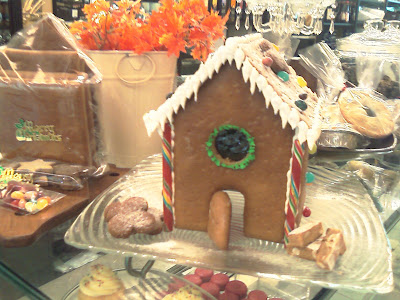 Greeted us at the door, was the wonderful gingerbread house! Yay I'm a sucker for such food fantasies!!!
Bloggers were invited to mingle with the people from Philips as well as their PR agency. It was a great move by the Philips team, in an attempt to get to know bloggers better in and understand the ill-defined rules of engagement with citizen journalists like us. Like I said, at first, I thought it would be another boring networking event, but surprisingly, the employees from Phillips were very engaging and warm! Not corporate mindset whatsoever! They were ready to explain to us their new line of audio and visual appliances and very keen to hear feedback from the floor! haha.. as usual.. I hammered a whole load of questions for them to answer, and they managed to answer them very well.. 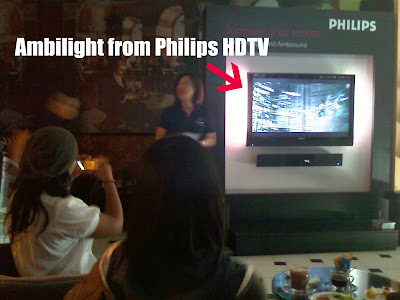 I was particularly impressed by the Ambilight and Ambisound line of products. Can you belive the algorithm for the ambisound technology was created in Singapore! Way to go man! SINGAPORE BOLEH!!!!

So basically, you know we typically have 5 speakers surrounding the room so we can enhance that cinematic feel at home.. you know the surround sound from the bombing of planes and bullets riddling the body?? (think pearl harbour)

So what Philips has come up with to combat the problem of the excessive wireing from the 5 speakers as well as the $$$$ you have to fork out for that cinematic effect, the AMBIsound system has only ONE speaker that enables you to hear sounds like you normally will with 5 speakers. Basically, this ONE speaker in front, is able to simulate sound from 5.1 channels and can enable you to listen to quality sounds without the hassle of having toooo many speakers.... I seriously heard it for myself and I was blown away by the audio system...

I'm not an audiophile of any sort so when I say that I was tempted to snatch the speakers off and make a beeline for my home (hehehe... yes I have the propensity to steal when I see nice things...)... the only thing that held be back was the other pingster there, who could of course point me out in a line up... 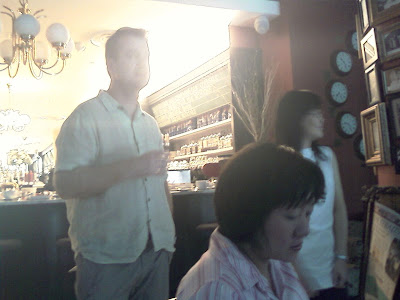 Also what was DROOLWORTHY was their HDTV!!! I tell you man.. its awesome. who would think to attach LED lights at the back of the TV that are sensitive enough to tell when the lights from the TV changes and is able to project these light onto the wall at the back. Of course when the wall is white, everything lights up well and dandy... but the only down side to this is that if you have a coloured wall, the effects aren't that pretty...

I never knew that such a technology was available but I tell you it is a movie goer's wet dream can?

YOU HAVE TO SEE FOR YOURSELF!!!!! the whole experience is enchanced by the play of light on the wall.. I'm trying very hard to explain it in words now, but unless you experience the ambilight at work, you really don't know what you're missing!!! 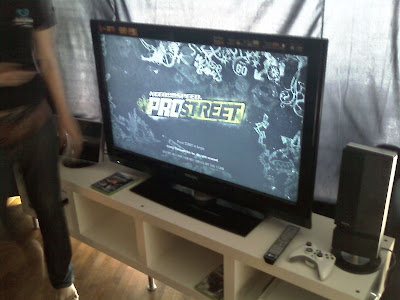 I would totally recommend this product to people with white walls and someone who can realllllllyyy enjoy and appreciate good lighting effects when watching movies... it's da bomb man! If you don't have a white wall, then perhaps this might not be the most suitable appliance for you, to be honest...

Nonetheless. I had a real good time!! They gave us this great party pack with this really smashing electronic tea light candles and a really nice folder giving information on their new audio appliances.

I met other bloggers like DK, Eastcoatlife, MissCel, Jayden, Ice Angel, Daphne, Ming and Sarina there! It was just good to catch up with them over FREE breakfast!!! (wah I'm cheap can??) 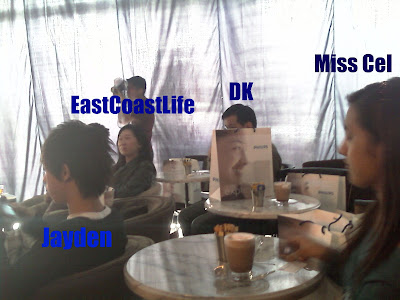 I was reallly upset the last part, there was this lucky draw where they gave out this super bling swaroski crystal lock thumdrive .... I'm always damn suay at lucky draws.. I never win any!!!!!!!!!!!! Like any other day, the prize went to Miss Cel and 2 other people... I'm glad I don't remember now because I would get plan to get them mugged!!!!!!!!

All in all, I must say that it was a fabulous event... I think companies like Philips now are beginning to embrace the power of social and new media. 2 thumbs up for their attempts. It didn't fall falt on their faces like I would expect from MNCs like them with shallow understanding of new media. Way to go Philips.

yea exactly, the sound effect is NO.1! i experienced exactly the same thing in creative as well with their X-Fi technology (something like that). They play the matrix movie(the bullet one), and its super cool!

I'm quite sold to Philips actually... I have a SONY at home now!

i love the philips amberlight. i saw one at best denki in vivo city and thought to myself, man! that is one sexy tv! and wong kar wai directed the short film/ad!

ah well, i guess i've moved from more functions in my tech, toward the idea of simplicity. i just love sexy tech!

yes brian... I know u love sexy tech.. it shows! Wooot and cheers to good taste!

Estee, you can save some cash by DIYing your own ambilight system for your TV or computer screen too. See this demo with related how-to article: http://www.youtube.com/watch?v=IAQTaQva3AA

hey Kevin... thanks for that tip.. Om gonna watch it now... will save poor peons like me a lot

i have set an appointment with Santa... but dunnoe whether he's free or not.. i tried last year, but ended up with disappointed.. Santa was too busy meeting others..... Hehehehe...

So good to see you again sweetie! You look fab!

now I among your readers