Pussies or PCs? Now you can have BOTH! 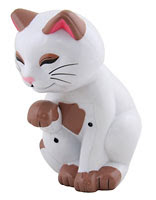 Firstly, pussy cats! Meow! The USB Kitty stands (okay, crouches) about 4 inches high, bobbing its head as it demands attention, much like a real feline prima donna. Using a handful of sensors, the device also meows ingratiatingly when you make kitty-stroking motions near its chin. The Kitty is just like a real pet, only with a timer, an alarm, and a repertoire of cat-language birthday songs. At least you don't have to clean a litter box. 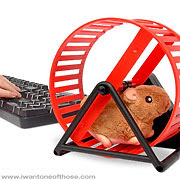 Know how girls go nuts over small furry animals? Yes guys hate those fluffy rodents, but it might be strategic to from an alliance with your four legged friends. Why? Because your girl loves them. In other words, you have to PRETEND you love them as well. :) Buy her a pet that won't poop all over the place -- just plug and play! The USB Hamster Wheel provides a dramatic demonstration. The faster you type, the faster the toy rodent runs, and the faster the wheel spins. Of course, a person could take the metaphor of a hamster running but never getting anywhere in a negative way, so this might not make the best gift.

OK so your girls isn't as tech savyy (read: geeky)as you.. instead of having her vent her frustrations on you, invest in one of these, trust me, worth the investment totally... No matter how much you love your PC, at some point you may want to clobber it into a thousand tiny pieces. Save yourself the expense (and the cleanup) by investing in the ScreenSmasher, a foam axe that comes with a USB sensor. Whack the screen, and your Windows desktop will display an image of shattered glass, along with a crash sound effect. Therapy never came so cheap.

Hey, are you gonna eat that? A rule must exist that if you traditionally eat something with chopsticks, you should be able to store data on it, because no other explanation springs to mind for these USB drives masquerading as sushi, takoyaki, dim sum, and tempura shrimp.

If a prize were awarded for the grisliest flash drive design ever, the winner would be this one, which looks just like half of a human thumb. I'm sure there's a hitchhiking joke in this somewhere, but most people would likely be too busy gagging to think of it.
Posted by eStee at 3:10 AM