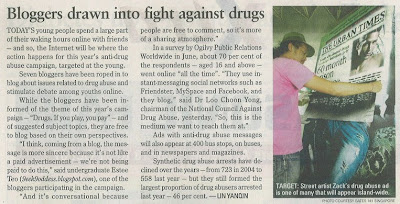 It's not everyday you get to be on TODAY, get tomorrowed and get to be on Daily SG, unless of course, it's for a super duper damn good cause (or a freaking big scandal, read: politics, sex or both combined even better).

So it happens that on the fateful day of 19th October 2007, I get the honor of having a sweet spot on all three publications (well, sorta).

Thanks to the good job of the National Council Against Drug Abuse latest campaign, which embodies the slogan, "If you play, you pay". We're fortunate that in Singapore, drugs are that rampant, so perhaps in a certain way, we aren't that tempted -- there aren't that many opportunities that we come across that exposes us to the risk...

I remember being in the States and that it was much easier there to get hold of such substances.. many a times I must admit that it did pique my curiosity and since many friends were taking it, and surviving, it didn't seem that dangerous... but on the other hand, I'm glad I made a choice to stay clean...

I think when it comes to drugs, everything boils down to personal choice. We have an "ADAM" in all of us, where we point the accusing finger at the person next (and sometimes closest) to us and say "Eve made me do it, Eve made me eat of the apple..." But really, no one can put a gun to your head and force you to do something (unless you take this literally!!), so as individuals, what really matters is you make a stand and stick to it.

Why risk throwing everything away by getting hooked, and worse still, getting caught and put behind bars? I really never liked those scare campaigns where they showed posters of this woman with cancerous sores all over her mouth from smoking too much. I don't think scare tactics work, in fact I think they are a turn off. There has to be a balance between the real truth and just plain gore.

I think this NCADA campaign this year has been done very tastefully, a good balance between the facts and also engaging youths in playing a part in spreading the message. Not only have they chosen mediums such as blogs to spread the message (7 bloggers have been recruited for this campaign), they are also investing heavily on online mediums -- a very tactical move. Afterall, my mother knows that if she can't get me on my cell, she can always skype me, gtalk me or MSN me.

Youths today are a hip, upwardly mobile, online generation who can think and stand on their own 2 feet. Let's make a stand and say YES TO LIFE. Thanks Singapore SEO :) Lets hope the NCADA campaign takes off!

congrats, my darling girl!!! you're gonna be famous now! i hope you'd still remember me when you're a star...hahaha. but then again, you'd be able to afford to hire me as your housekeeper/chef/all around maria then. hee hee

darling dawn, I'll never become famous and second, I'll never give up a bestie for anything!

"Blessed are the peacemakers..." Matthew 5:9

On a side note, the only drug worth getting hooked is caffeine.

shingo-t: thanks, I really needed that. Love caffeine. If it was considered one of the drugs, I'd actually boycott the campaign.. kidding la :) But yes, daily dose of caffeine is healthy, to kick start the day!

hahaha, if Caffine were banned, boy.. we'd all have to move to amsterdam

If it were banned in amsterdam, I'd consider the option of moving to mars, really...