UPDATES on POLICE outside NUS LT10

Previously, I blogged about the police and investigators outside NUS LT10, outside the male toilet. I was there just doing my work when suddenly, plain clothes men were walking around, pictures were being taken, and everyone was talking in a hush hush manner.

Didn't seem like much to me until I realised that something fishy was happening. My first thought... OMG, CSI man... some crime happened.

I asked the plain clothes men what it was, he brushed me off telling it was nothing much. Of course trying to allay my fears, but.... with the police around collecting evidence and disallowing anyone from entering the male toilet, THERE MUST HAVE BEEN SOMETHING RIGHT????

This is a pic I took: 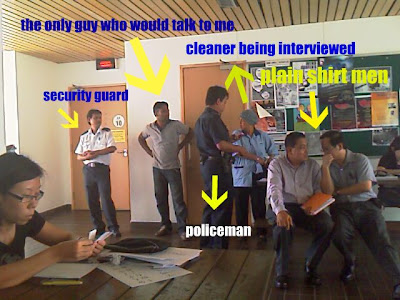 Perhaps the policemen interviewing the cleaner auntie is clearer: 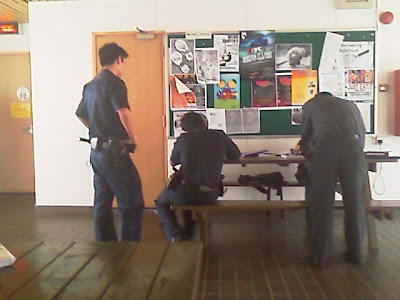 Anyways... I finally managed to flip the pics... my previous post was a bit screwed up because I didn't know if I was supposed to take photos... but I guess they did see me doing it, so should be OK?

Anyways, I was wondering what was wrong because when I asked this girl who apparently knew what happened, she told me it was inappropriate to tell me. Perhaps that was true cuz I was asking her right in front of the police officer. (yes I'm damn kaypoh can?)

So later on, when the police left and the "coast was clear", she told me that there was grafitti written on the wall of the toilet.

It being a male toilet, I couldn't enter....

But more to that, there was this... 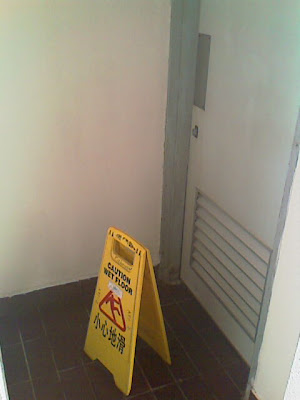 But then how could that stop me? I know la, I'm not your typical CSI investigator... but I went in still... to check out what was written on the door of the toilet...

This is what I saw:

Number 1 toilet was okay, functional... and open but number 2 toilet was sealed up. I pushed the door but it wouldn't budge. 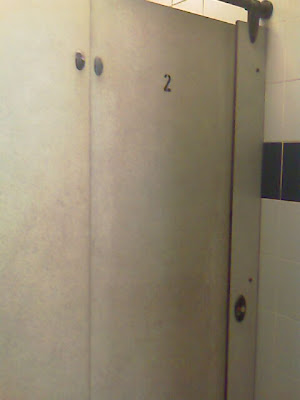 On closer investigation, the toilet had been locked from within.... 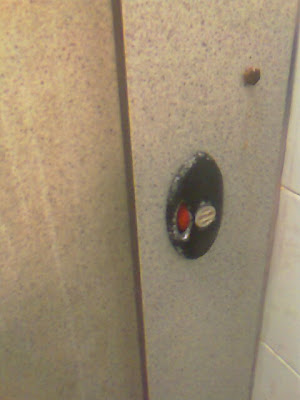 So, no choice I went outside and the lady cleaner shoo-ed me away to tell me I wasn't allowed to enter -- she had work to do... she said she had to use some chemicals.

So I waited while she and her colleagues went in and I guess, cleaned all evidence off the wall of number 2 cubicle before they all left and took away the sign from outside the toilet.

Of course, being me, I went it.

The whole place was washed and scrubbed clean. And the number 2 toilet was open. I went in and took this picture of the inside of the door. 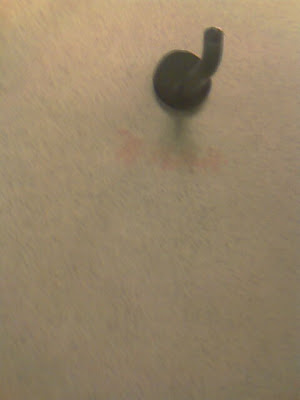 Can see still some remnant marks, but apparently it has been almost erased clean.

NOW... WHAT WAS WRITTEN ON IT????
Later on I found out that it was not the first time this had been done, in fact this had happened before... (I don't know how many times though)....

I was curious to find out exactly what they were, but no one around would tell me. None of the cleaners wanted to say anything...

Guess that's the ending to this encounter.

I was like super kancheong because initially I thought it was some like murder or what nots, then I thought it was arson... now we all know it's grafitti... of that sensitive nature.. which was why no one would let me in on anything...

I don't know how else I can dig info now. I guess case is closed, unless I meet this encounter again... but must be pretty harsh/sensitive statements to warren the police and investigators down huh?

What do you guys think?

*disclaimer: Do not quote me on anything in this blogspace. DO NOT. Do not take what I say as the truth. Perhaps I am just sleep-blogging. I do not welcome further questions regarding this issue to my email about this incident. I consider it case closed and will not blog more about this after this post unless completely neccessary.*
Posted by eStee at 4:47 PM

Haha, super funny. You actually really went in to check.

Should have climb from cubicle 1 and peep in from the top. haha.

Lucky you're a girl entering a guys' toilet.

If it's the reverse, you're dead.

In any case, can you delete the repost of the mass email? People just can't read. !@#$

Gabriel: hello, I hope you find this girl or solve this problem!

Eugemon: yea I wanted to climb over, but got caught inside by the cleaner woman

agagooga: What repost of mass email? SOrry don't get you...

and with regards to going into the male toilet.. haha I should have taken pics of the urinal.. just for kicks!

I am referring to the comment by anonymous: "Witnesses needed - arts canteen scuffle (24/3)"

I would rather it not be posted online

gabriel: u want me to delete that comment is it? But then y u posted it? Oh u thought I would moderate comments ah?

Some anonymous guy posted it for some unknown reason.

else try spray some chemicals! sure got residue one... react then can see under UV wor!

eterna2: I asked the auntir but she just say nothing, cannot say... so how then? I can't possibly enter the male's toilet agaain!

Erm. The person is anonymous. How would I know?!

Can you just delete it?

So in fact you wrote a freaking long blog entry about finding nothing?

Come on, save your time for better things.

hahaha!! not fast enough. This could be the next big issue in the net. Hitting the top 10s in ping.sg

and My name's eugene-mon. =D

There are 2 things we learn here:
1. Singaporeans are damn kaypoh.
2. Good looking chicks don't have the brain. 'Whos this anonymous guy?' LOLL

agagooga: ok i nv delete comments b4, I'll ry in a bit.

anonymous: so u read this whole post and found out it was nothing and yet persevered to "waste" your time to comment on this blog. too free indeed. come on save ur time for better things.

anthony: well, form nothing I found out that it was graffiti and then from there found out it was about mas selamat... just didn't find out the exact words.... I think that was pretty decent... for a girl with the audacity to enter male toilet.

To Anonymous (the 2nd one):

You are right, 'good looking' chick doesn't need to write anything meaningful to get famous.


To estee (the brainless one):

It was indeed a waste of time reading this entry. But it helped me to realize how brainless you are, so it's not a total waste after all.

Teasing you and speaking out on behalf of many others who think the same way, no it's not a waste of time.

anonymous: Y u don't dare leave your name? Y leave as anonymous? R u too ashamed to say your own name? If u leave ur name, I can accept your comments because everyone is entitled to their opinion, whether or not I agree.

should thank them coz they say you're good looking lah.

Erm most prob some "Allah Abkar" slogans supporting MSK... I qouldn't be suprised if it was the case as alot of highly educated individualsr now being self radicalised...

sylv: thanks for being neutral

eric: its some comment regarding mas selamat... but I don't know exactly what

LOL. I actually thought I *was* kepo..until I found your blog.

And anonymous, seriously, we the internerds call people like you who leave negative comments on people's blogs/sites BUT remain anonymous, A PAIN IN THE SCROLL.

You know, we just have to read your anonymous identity, find out that you speak rubbish, and have to scroll down the page. Sigh. (In real life we call you a pain in the ass though)

Sorry estee, can't hold back my testoterone raging. Just watched Shoot Em Up and feel like plucking a carrot into somebody's throat :P

way to go estee! i love your free wheeling and adventure seeking spirit, screw everyone else who differs. ;)

ya..i applaud your bravery to enter the gents just to find out the truth..LOL..good effort though..

julian: so I guess I am super kaypo rite? i know also, i had watched CSI the night before mahhhh!!! :)

meow: Wooot... curiosity kills the cat... but satisfaction brings it back!

anthony: I dare u enter the girls toilet!! muahah

haha, u should go sign up as a STOMPer lah estee :p

so interesting, shall go kua kua LT10 when i go back nus next wk :p

finally, I found this article again. You have few [url=http://tipswift.com]useful tips[/url] for my school project. This time, I won't forget to bookmark it. :)