I must say that I've had a really wonderful weekend. A weekend I haven't had in a long time. The truth is that when Ming is around, we end up lazing away the Saturday, stay in and "nua" until its dinner time, then go eat a BIG FAT meal, come back home and vegetate.

Sundays I join Shimei for church, but then, normally meet Ming again for a sinful dinner with his friends (Yes, Sundays are always dinner out with his chums), we come back, and basically sleep.

Friday nights are supposed to be reserved for him and me, so I don't get much time out on Friday night, unless my plans with the girls happen to be over 1030PM, then I might get a chance to tuck him into bed before I head out.

The last few months, this month in particular, he's been traveling a lot lot more, which leaves me a lot lot more time to myself. Normally when he leaves, I'll feel a sense of sadness, like I'll miss him, but I think our relationship has just gone to the next level that (or I at least), am able to have him gone for weekends on end, but yet know that the next time i see him, things would be exactly as we had left it. 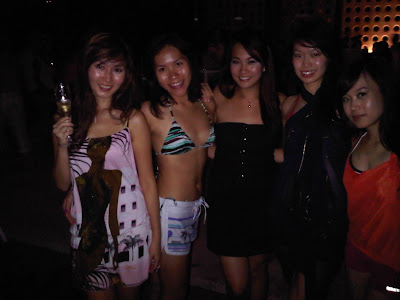 A couple of weekends ago, Angie's bday, and I think it was a Sat night, when I managed to head out and join the kids at Tanjong Beach Club for drinks. 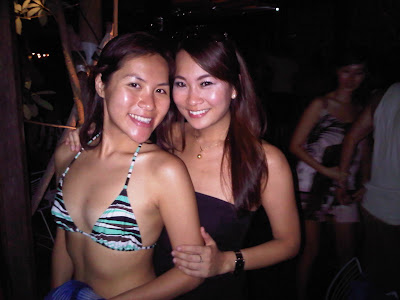 and then last week, being a killjoy that I am, I met the girls for drinks at Robertson Quay, then left right before they went to Filter. I guess I'm not into activities where there is huge amount of LOUD music, where u can't even talk to someone else without having to shout. Once and then its OK, but not perpetually. Not my cuppa tea.

But I digress. Ming Has been away this week since like Tuesday where I sent him off the the airport at 6am, and since then i have been nothing but productive!!!!!

Managed to complete some stuff at work, did some research on competitors, met my distributors, brainstormed up some activities, etc.

And by Thursday, I had the WHOLE weekend planned out. Literally. BACK TO BACK. It's not common that I have a whole 48 hours to myself and I was determined to make full use of it.

- 1PM: Bistro Du Vin (@Shaw Centre) with Weisan, Nicole and Raine
Quite an OK place, but I thought the food was pretty pricey and DO NOT order the codfish, it was YUCKY. The duck confit, a specialty was good and the beef cheek was very well done too. But not advised if you're on a budget. Total damage per person, $60. (we charged starters and desserts) 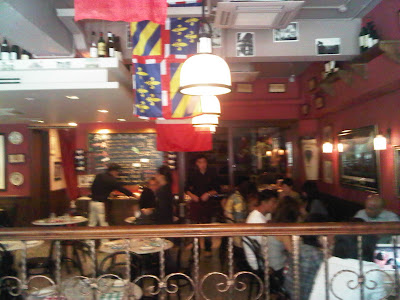 We got a really nice window seat, but the A/C was not working well, so we were sweating like pigs, had to ask the waiter to up the A/C. 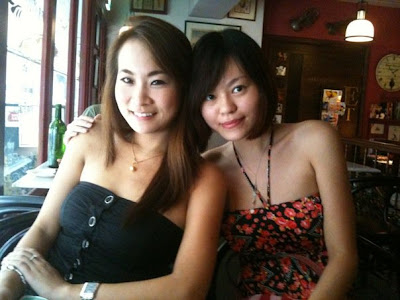 Weisan (with her very pretty new short hair) and I 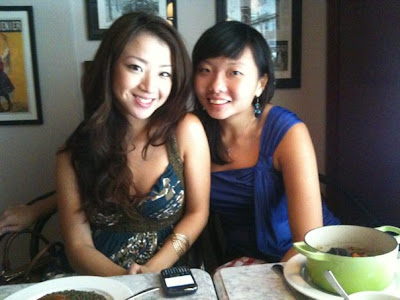 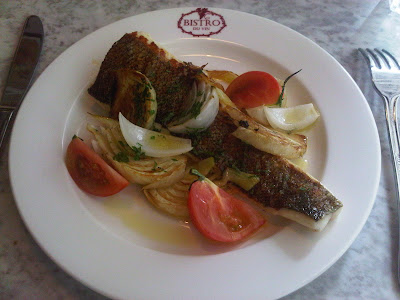 My codfish, which was an absolute let down. Its not snow cod. Its some other shitty cod. 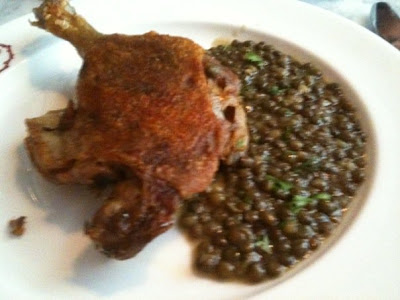 Duck Confit was quite good, so props to that. 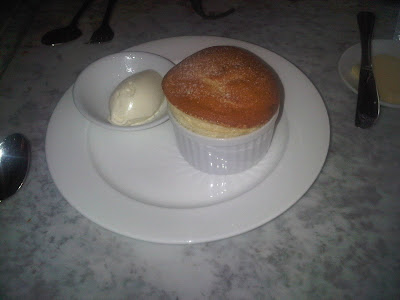 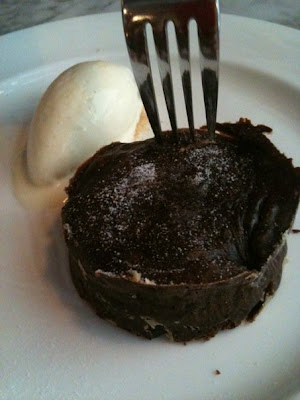 But anyway, not the point, we really got to catch up, which was good. The things about huge group of girls going out (as we normally do) is that there are too many mini conversations going on that you end up not really catching up with anyone at all. But 4's a good number. And what did we talk about??? BOYS. yes you got it. Job, yea a bit, but BOYS, a lot. In the end, we always only talk abut boys.... that's what girls do. Or maybe that's what my friends and I do. We run down who we've met recently, who's not with who, who's with who, and then update on our own love lives... it's amazing. We never grow tired of talking about this :) I wonder how life would be like if I didn't go to RGS. I wonder who would my friends be.... if I would be this happy.

-3pm: Rused to Watsons in Ngee Ann City to buy my BB cream

-4PM: Yoga. OMG. HOT YOGA. I hate myself whenever practice starts but love myself after practice ends.

7PM: Meet Melissa and Shimei for dinner at Sushi Tei. We always have the same thing. Such bores. Glad to have met Melissa, the last time I saw her was a year ago, in Ngee Ann City too.

9PM: Head off with the girls to Barstop for drinks with Jaren, Steve and Jiawen.
The point is that I think Jaren has changed a lot as a person. I told him that last night in a private text. It's as if he's become approachable and less obnoxious. I like the new Jaren. I want to hang out with him more, and I don't normally want to hang out with any old guy. But I think Jaren has sort of changed over the time that I've known him, I'm actually impressed with the person he;s become. Even Shimei thinks so....

And Steve, has ALWAYS been Mister nice guy, called Shimei and I to ensure we were safe back in my car. Every girl needs to date a Steve. The irony is that he doesn't have a girlfriend yet!!!! Holler if you want to get set up with Jaren of Steve (both single) ^^ 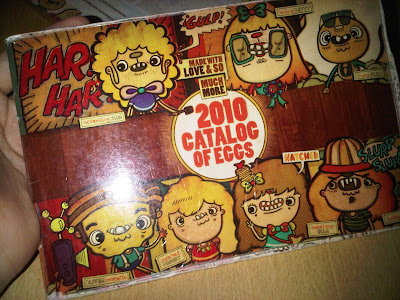 I LOVE Hatched. Surprise, surprise. You know how your expactation build up for a place, whenafter 4 times of trying to reserve a seat, you get turned down? You ask yourself if it even is THAT good. But finally, we managed to make a reservation and YEEESSS! It was awesome. I guess it was the unpretentious food, good price and best of all, we got to speak to the owner.

"Wow, you've got a really cute shirt! Is it a uniform" (the kaypoh that I am) 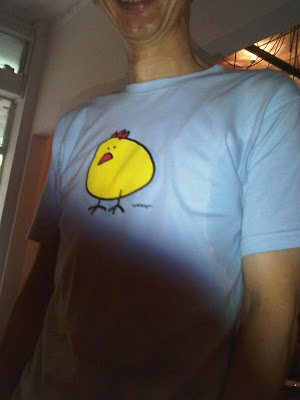 "I am just helping my son, he runs the place, he's 28"
(meaning, I've funded this project for my son to try his hand at running his own business and now I have to spend all my non working in my real full time job time, waiting tables at his project)

"Wow, we love this place, it's great"

And then he tells us a bit more about the history of the place, how things fell in place.. and one thing that touched me was when he said this project has done well for him and his son and they have bonded very well from this experience, and he said "The bonding is priceless".

I look at him, he reminds me of my dad. Loosing hair, thin, but extremely dedicated to our family and I think to myself. Mothers are always known to be awesome, the pillarstones. But dad are soooo underrated...

Anyway, he ends off also saying, "My son is single" (points at his son).

I spin around and look at this 28 year old guy. not bad looking, nice build, seems to be busy tending the till.

"Uncle, he is single, but confirm attached, right?"

"Then why you say he single? Haiyah, you sound like you don't really like his gf ah?"

We all break out into sheepish laughter (which was great for me because sometimes I speak so fast, thanks God that wasn't an awkward moment after my silly comment) 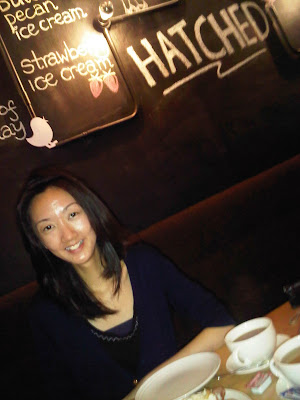 Shimei waiting for the food... 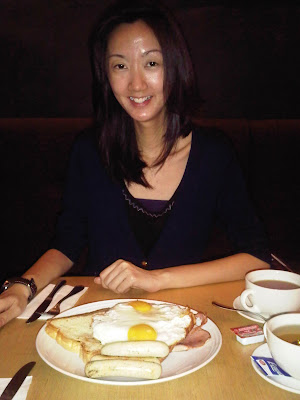 A clearer picture of the food. We has a "BFF" set, which allowed both of us to share 2 portions of everything nice. 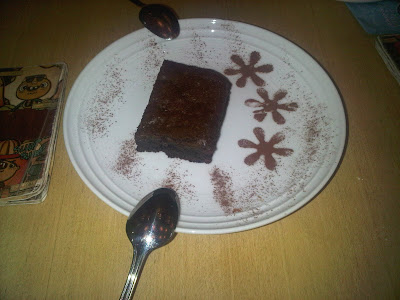 NEVER not space for dessert.

Overall, great experience. Must definitely go back again. Say bye bye to Epicurious for brunch, it has been a let down a few times too many!

- 330PM: Adjourn to TCC with Shimei to meet Amelia. And what do we talk about again? Boys.

I'm not the kind that blogs very frequently, but recently, something's come over me, this huge need to put my thoughts into words. Being without Ming this weekend has allowed me to really catch up with many of my friends whom I would not have other wise met. Especially Steve and Jaren, who I've known for eons already. I feel fulfilled this weekend, I feel as if I have not wasted my weekend sleeping in.

But Monday has come too soon and at the end of Sunday, after the flurry of activities, I miss Ming and I want him back soon.

To be a upright lenient being is to from a make of openness to the world, an ability to trusteeship aleatory things beyond your own control, that can take you to be shattered in very exceptional circumstances as which you were not to blame. That says something remarkably important relating to the get of the principled compulsion: that it is based on a trustworthiness in the fitful and on a willingness to be exposed; it's based on being more like a shop than like a sparkler, something fairly fragile, but whose acutely item attraction is inseparable from that fragility.

Anyway, thanks for your nice comment on my blog. Have a great day ahead yeah?

Aww babe, what a sweet entry! Haha. Like a diary. I should blog more...