It doesn't matter, does it?

It doesn't matter now, does it? The point is that it shouldn't.

But the truth is that it still does. Much less, but still a very real feeling.

What good does it do, scrolling pages, trolling pages after pages, trying to scrutinize a person I once thought I knew.

It's funny how something can attach itself so strongly to your soul and not let go. But perhaps, I'm the one attached to his soul. Though I don't admit it. It's real, you know?

Have you ever done something that doesn't make sense, but you still do it anyway because of a huge compulsion? 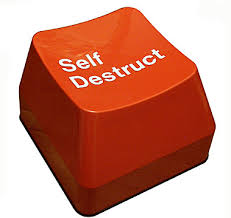 It's senseless. Make belief stories that once a while you remember me, remember us. But no.

Somehow I want to curse at you, hope you just die slowly of some cruel venereal disease, but part of me can't wish that upon you.

Do you remember the walks home? The cinemas, the taxi rides, the corridors, the tuition session, the long conversations over the phone? But how does it matter anymore?

It's long buried in the murky past, most of which I seem to make up as we go. It's hard to really separate reality from imagination anymore. The line is blurred and somehow when I try to recall some details, its as if I end up asking myself "Did that even happen?" or "Was this how it really happened?"

The mind is powerful, somehow, painful things are hidden in the deep recesses and its as if the mind has some up with a defense mechanism to conceal things that does no good to the body. Smart, isn't it?

My life has taken a huge improvement since you. But in between, I've hurt (an)other(s), I've mistreated them and seen them with eyes that deserved to be dug out. I've judged, criticized, magnified their flaws. And I'm sorry to especially one person I hurt and to the rest who were unexpectedly tangled in my destructive webs.

I (think) I'm a lot happier now, things are no, not yet perfect. But they never are right? I'm at a better place, I know what to expect, I trust, I've learnt that I can't superimpose my stereotypes (from you) on others. Everyone is different and everyone needs to be loved as a whole. Because the whole is greater than the sum of its parts.

And whenever he calls me, my heart warms at the sound of his voice because this is a voice I can trust and this is someone I would never want to hurt in any way (although I know sometimes I do). This is a person who has learnt to change to help me change. This is a person who is proud of me. Who trusts me when I don't even trust myself. This person actually loves me.

So to all those who have had their heartbroken, the next time, I look into your eyes and tell you, I understand everything you're going through, I really do. And I'm not just saying it to comfort you.
Posted by eStee at 10:26 AM