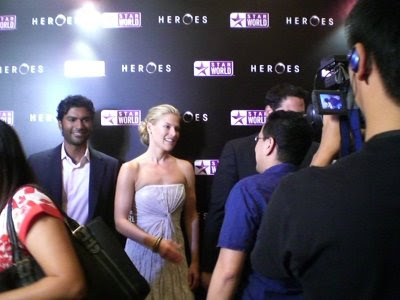 I MET THE CAST OF HEROES! YES! IN SINGAPORE UP CLOSE AND PERSONAL! I got to talk to them, interview them and take tons of pics!

When Nokia invited me for an exclusive meet & greet session with the cast of heroes I jumped at it. Like HELLLLLOOO EEAAARRRTTTHHHH!!!... eh give you meet stars free of charge don't want ah? Mad! I've been a fan of Heroes since forever and wth, with a lethal combination of good lookers, what was there to not want? Moreover, I got to meet Claire Jedrek (yes deal or no deal girl!) 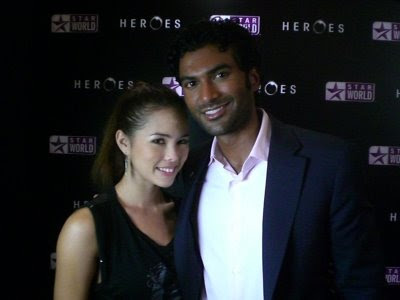 Basically, I was told that this vodcast would be almost fully filmed on the N95 phone and I would be able to live my dreams as a cast of heroes. You see, when i think Heroes right, I think of Hiro saying "yaaaataaaa" and disappearing or Peter Petrelli jumping off the building.

Firstly: NO WAY AM I JUMPING OFF A FREAKING BUILDING -- sorry but I'm KIASEE!

Secondly: I AM NOT GOING TO BE PUT IN SOME TIME TRAVEL MACHINE AND TELEPORTED ANYWHERE.. (AT THIS POINT I THNK OF THE SHOW "THE FLY" WHERE THIS GUY TELEPORTS FROM ONE PLACE TO ANOTHER AND IN THE END TURNS INTO A HIDEOUS FLY!)

BUT then, thinking about turning down an offer to meet the cast of HEROES, was worse then being turned into a fly plus jumping off a bridge, so without hesitation, I was like 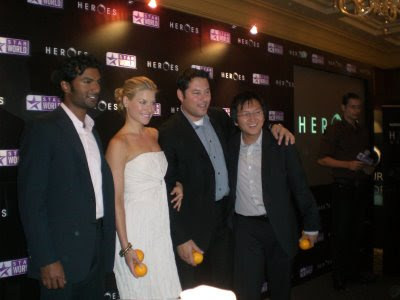 Well, of course after that I learnt that with the video editing software included with the N95, Claire and I could adopt the skills of the heroes and be teleported anywhere - anytime!

Unfortunately, only 4 of the stars came, but early at 7AM in the morning, I was at Goodwood park hotel, all ready to get going with my bunch of questions.

I can tell you for sure that by far he was the most charismatic personality there. Apart from his dashing good looks and his to die for charm, I was swept away by his silent presence. He didn't say much to any of us, but who am I to know, I was probably awestruck by his million dollar smile!

yaaatttaaaaaa! I love hiro, yes not because he is drop dead, but he's just so cute!!! I just want to pinch his rosy cheeks!!!! I love him, he's so tiny, and he doesn't speak in that jappy accent like he does in the TV Series... He speaks perfect American English! OMg basically he's just an overgrown baby! -- not in the bad sense though...... I want to keep him at home!!! You know the chinese say to "yang3 ta1".. meaning to rear him.

But seriously, despite the babyish exterior. He spoke sense -- Lesson from him: every one is a hero, you don't need no special powers like teleportation to change the world we live in. The moment we touch the life of someone else, we're already a hero to that person! (You can hear more of his words of wisdom in the Vodcast below)

She was HOT! Enough said right? She did, although go to the bathroom like 4 times in a span for like 2 hours or so.... or maybe it was 3 hours, the entirety of the press conference. She hasd rock solid body, well toned arms... ok la. I swear her blonde hair looked gold. I loved the way she had her hair in locks... oh well, she was just really pretty can? One of those genetic anomalies (ok I'm starting to sound jealous here!) But really, she was the ice-iest of them all, perhaps to portray that ice princess feel... the guys still swooned -DUH-

Greg was by far the most friendly, although he isn't as drop dead as Mohinder Suresh. He talked the most, made jokes and basically mingled around with everyone. In the vodcast you can see below, I actually get to interview him and ask him a question. Basically, he was bubbly, chatty and really did not have any airs around him.
Of all the stars that we got to mingle with that day, Greg by far was my favourite.
I just like his down to earth attitude. Yea ok I might seem damn freaking shallow or what oogling at the super cute people, but really Greg won by a mile at the end of the day... Greg was just like any other person la, basically.

Anyway, as I was saying, since this meet and greet for Claire and I was fully sponsored by Nokia in their bid to help promote the Nokia N Series phones, this vodcast was all about our interview with the cast of heroes, how Claire apparently makes me dissappear, and how the N95 can help us with video editing. The N95 comes with software to edit your video, and as you can see, after the nifty video editing, it seemed like ...

Claire and I could adopt the skills of Hiro -- being able to teleport at will! CHECK OUT OUR VODCAST AND INTERVIEW BELOW!

With that said, make sure you watch this vodcast above. You see me with Claire meeting the heroes and how she pretends to keep me in suspense!!! This vodcast is just 1 of 14 vodcasts done by Nokia, so if you're keen on following the whole series, or just watching more of eye candy, Claire, click here!

omg that's too freakin' cool. i love the heroes too! you're so lucky!!!!

I know I love the heroes too! They better get all the seasons up and running soooonn!!!

Estee I am so jealous! BEWARE

ermm..coming from a guy..yeah I love heroes...perhaps the only show I watched in its entirety...

Now that the writers' strike is over..I too am looking forward to season 3...so many questions..hmmm..

haha so many question, hopefully the addition of new cast ... more suspense!!

Wow... impressive stuff GG (: Looks like you had great fun! So where to from here??? Is that Hollywood calling... Cheers!

my gosh!! i also want to meet.. although i don't really watch the show but i want to meet all the same haha

hey, here is the site i was talking about where i made the extra cash, I was making about $900 extra a month...
check it out ..

You met the cast of heroes! How awesome is that? You must have been super excited. I know I'd be!

I really liked the video tip of the Nokia vid clips. Makes me want to try it out for myself

rinaz: Yup the cast was awesome... :) hope they'll come again then we go together stake them out k?

i wish I could turn back time sia... or maybe "time warp" myself back!

hahaha, that's something the video doesn't teach you, but you can definitely rewatch the memories!