Singapore succeeds at EVERYTHING - except DATING

Yes, it's sad but true. Singaporeans succeed at everything - except dating. Well, not that I had to mention it, but last week, the International Herald Tribune reported this on their Asian highlight. True or not? Well, read on for their argument... 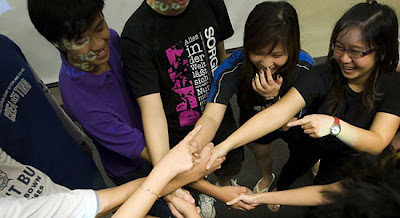 Students at Singapore Polytechnic during a class intended by the government to help set off romance among young people. (Pic taken from The International Herald Tribune)

Well, apparently, as reported, students from Singapore Poly had a sort of "college mixer", to help the males and females interact to boost chances of them dating. They had assembled for the first class of "Love Relations for Life: A Journey of Romance, Love and Sexuality."

The course, which is in its second year at two polytechnic institutes, is the latest of many, mostly futile, campaigns by the government to get its citizens to mate and multiply. Its popularity last year has led to talk of expansion through the higher education system.

"We want to tell students: Don't wait until you have built up your career, SOMETIMES IT'S TOO LATE, ESPECIALLY FOR THE GIRLS"

The courses are an extension of government matchmaking programs that try to address the twin challenges embodied in a falling birthrate: Too few people are having babies and too few of those who are belong to what Singapore considers the genetically desirable educated elite.

For 25 years, the mating rituals organized by the government - tea dances, wine tasting, cooking classes, cruises, screenings of romantic movies - have been among the country's least-successful social engineering programs.

"Some people say if you're a smart guy you should marry a smart woman who can help you with your finances and career," said Chan, whose agency is called Club2040 and who has worked under contract for the Social Development Unit.

eStee Thinks: Definitely, couples should complement each other, but having similar interests may not be the be all and end all of a successful relationship. It takes more work than that. I've seen people who complement each other break up down the road and also have seen couples who seem as different as 2 end of the spectrum last a long time as well. It's not cookie cutter!

Despite everything their teachers had told them about multitasking work and love, none was in a relationship. And nothing they had heard in class seemed to have dented their stereotypes about the opposite sex.

"I'm not open to relationships in school. Boys in school are not my cup of tea. They are male chauvinist pigs. They're annoying and childish. And they won't give in to you. They're just not mature." said Wei Shan Koh, a former student who works as a teacher's aide.

eStee Thinks: Well Weishan, I honestly think you're childish too. I know we all talk about equality and all that but if you aren't able to respect a man or give a man the respect he deserves, then you won't go anywhere. As much as women claim to be equals, we have to accept that men can be better than us in certain areas and likewise. If you want to talk so much about chauvinism, then why don't you go enlist yourself into 2 years into the army then come back and act macho...

"I think girls' ideas are a bit childish, or you might say girlie. It's a matter of pride. Guys are more outspoken. We don't like a girl to be more outspoken." said Tian, who hopes to become an engineer.

eStee Thinks: Darling Tian, if you want a girl who talks less than u, then go marry a Barbie Doll k?

Kamal Prakash, who hopes to be a lecturer in mathematics, gave voice to what appears to be the common theme here, both among young people and their elders.

eStee thinks: Every stage of your life, you'll be busy with something. After this, it'll be work. Are you going to say then that you'll wait until you retire before you start scouting? Hun, multi tasking is good practice now for the future...

Singapore's childbearing age, is one of the lowest in the world and the 28th year in a row it has stayed below the rate of 2.5 children needed to maintain the population. But even a replacement-level rate would not be enough for today's planners. The government recently announced that it was aiming to increase the population by 40 percent over the next half century, to 6.5 million from the current 4.5 million.

"Teaching our youth in school how to fall in love" is a good solution, wrote Andy Ho, a senior writer at The Straits Times, a government-friendly newspaper that does its best to help out in Singapore's many campaigns.

In 1991, for example, when the government began

1) offering cash bonuses to couples with more than two children

3) Directions to some of the "darkest, most secluded and most romantic spots" for parking. It suggested covering the windows with newspapers for privacy.

Singapore is known for its campaigns to get residents to be polite, to smile, to be tidy, to speak proper English and not to chew gum. In 1984, the country's master planner, then-Prime Minister Lee Kuan Yew, declared that too few of the country's most eligible women - the ones with college degrees - were marrying and having children.

But in Singapore it is impossible to get very far from thoughts of money and the workplace. These guys may have other things on their minds besides romance and babies. :( Thanks to International Tribune for article..

Lessen the burden of day-to-day living. How to have mood for love when you are struggling to feed yourself?

Sometimes I ask myself:
"Would I get together with a sporean chick? Hmmmm....."
Sometimes I wonder how many people ask the same question to themselves.

Explore more blogs at
Free Blog Directory - A collection of links that helps peoples to find their interest!

sam: haha those are our very best oredi.. no more left.. plus the cleo guys may be gay... whu knows

mlmaestro: yah spore's standard of living way too high I know... but wat to do...

3point8: dun give up on singaporean girls man..once u think that we die!!

"We don't like a girl to be more outspoken."
What the freak! You see, this is why less of us are getting married. So young think like that already.

I don't know about more couples, but for more babies, damn easy lah.

The first step is actually to show people by EXAMPLE and not teach by textbook how to deal with being in a relationship.

Its a case of learning to manage one's expectations...

B4 sillpore can suceed at 'Dating' tink must 1st teach our youngsters to learn how to compromise!

Central library park has a lot of mating baboons... i mean students during exam times especially!

eh estee can i take this article and do a nicelegs thinks:..??

so how did u and ming find each other? LOL singaporeans.. just kidding oI! estee's if u were a fish, as in elaborating phrase "many fishes in the sea" u'd be cod cos u like white like i do and we're pretty fishes hahaha. COD!

tstar: the guy shud be happy his girl speaks up, instead of being plain dumb.

ian: i like the restrict condoms part... but then it would reverse our aids prevention campaign!!!

nicelegs: can can! :) i wanna read

eric: eh not all chinese girls are SPGS ok!

Nice article. I am amazed no one realized one of the things that really stood out for me. I guess not being Singaporean helps. ->

The WHOLE article mentions efforts by the GOVERNMENT to encourage people to have more sex. How "cool" is that?*sarcasm overload*

I really don't think helping university students go out with each other is going to change much. What Singapore needs to do is bring a few people over from more populated countries like India and China and let them loose on the Singaporean public. People from those countries have enough and well-proven experience in producing babies :P.

Sorry!!! Exams are over, hence mating season is over! Try lurking around end nov, early dec to do some homo underius gradiens watching.

Wah piang! Condoms are as cheap as they're now... How to find any cheaper ones? Remember not to compromise on quality ok!

Liquor is much easier though. Juz sell Barcardi 151 on wholesale prices and we will soon be experiencing population boom Wahaha!

Singapore is a country full of insecurities. We always feel threatened, and never feel secure enough of our place in the world.

So everything from economics to the press to education to (ugh...) "Racial Harmony" and now even dating (and by extension, procreation) has to be carefully engineered and managed.

When will the "man on top" start realizing that what 4.5 million people can create together by chance will always be superior than what one person can forcibly try to make?

eric: r u speaking from (sex)perience?

jon: u obviously support the opposition :)

Seriously though, I wish Singapore will start trusting their people a little bit more. How are we expected to mature and do better things if we are constantly treated like children and told how we should date or when we should "ideally" get married?

eric: u embarrassed i expose u here ah? :)

jon: i guess its because we're so "uniform" and law abiding thats y we're so peaceful.. and unhappening. ut I'm just glad we're all safe. Look at the unfortunate ones in myanmar and Chengdu!

Aiyo wats there to expose? I'm not a celebrity or wat... Nuttin scandalous cept i'm not a V-boi, dun tink its gonna b headline news anytime soon.

The natural disasters in Myanmmar and China are all acts of God, nothing to do wif gd governance ah!

You guys are #4 in population density in the world. You sure you want more people? Maybe it's better to wear 2 condoms.

eric: well, more lives and more aid will reach them with good governance!

michael: 2 condoms will cause one to break. That's a myth that 2's better than 1 in this case

Good point Eric. I think there is something to what you notice. Tell us about your experience with 2 Estee.

Looking for help and hope this is the right place.

I have had significant success finding and dadting great Asian Women using this [url=http://www.onlyasiandating.com]site[/url].

However I'm still looking for "the one" and wonder if anyone have any good tips on where I should look.

Amiable brief and this mail helped me alot in my college assignement. Thanks you seeking your information.

I think a dating website would help. Indeed many are now springing up aimed specifically at and catering for single Singapore women and men.