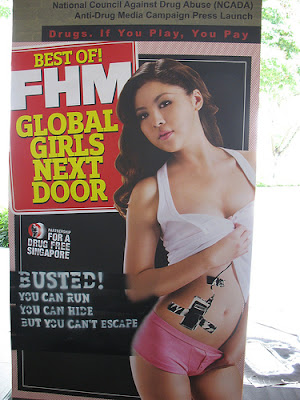 Typical FHM Poster? Look again!
That's the new tagline for this year's Anti-Drug Campaign (the website is drool-worthy!), targeted at youths at risk of falling prey to the use of synthetic drugs. Was this campaign a flight or failure to launch?

This 4-month long campaign was launched by the National Council Against Drug Abuse (NCADA) yesterday @ SMU and this initiative aims to grab the attention of youths through street-art and online interactivity. It also marks a refreshing change in strategy - for the first time in a decade, NCADA is doing away with its annual anti-drug TV commercial. 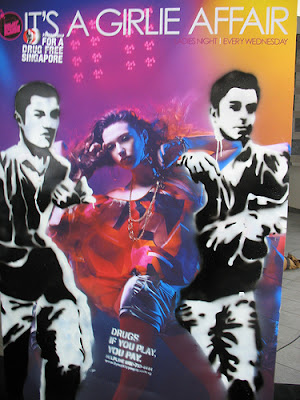 Here, students are using graffiti art to paint on 2 police men escorting a young drug offender away.. a cool twist on the original ad
Students are using graffiti art as a way of adding a "spunk" to the typical anti-drug message. They are taking real ads such as Perlini's silver, MOS' and FHM's and overlaying the images with the stark message, "if you play, you will pay".

This new campaign gets a 2 THUMBS UP from me. We're so used to seeing so many campaigns in Singapore, sometimes, I for sure, brush off another campaign as insignificant and "same old, same old". We've been flooded with so many messages from different campaigns, the speak good English campaign, the courtesy campaign, etc, it's inevitable that when another campaign launches, the messages gets lost in all that noise. 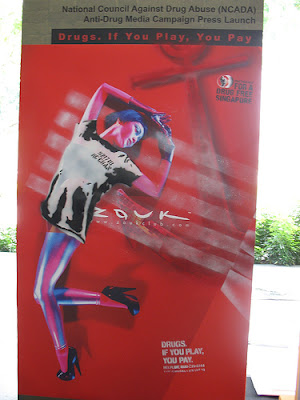 Zouk advertisement being "pimped" up as well, with the NCADA message painted on the t-shirt.
However, I must commend NCADA for a great job this year. Their change in strategy has been definitely well thought out. More often than not, TV commercials are the main medium for spreading campaign messages and they are a must-have in the marketing mix. However, this time around, they are eliminating this medium and concentrating on using the online medium.

A lot of youths are indeed spending a lot of time online, we blog, blog surf, (re)check our emails (every 5 minutes) and spend half our day facebooking (*sheepish look*)... I feel that using the internet as a way to target youths is a fun and fresh thing to do! Who would have thought any national campaign would be so bold as to defy traditional, almost "fail-safe" mediums like TV? 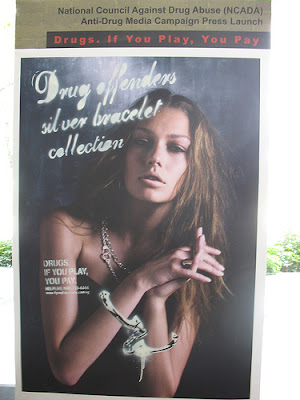 My favourite of the lot -- Perlini Silver's model gets painted on a set of handcuff, hammering home the NCADA message!
The launch of the campaign also caused quite a "BANG". Youths were allowed to be creative as seen in the pictures below, transforming traditional poster advertisements into those that cause us to look twice. 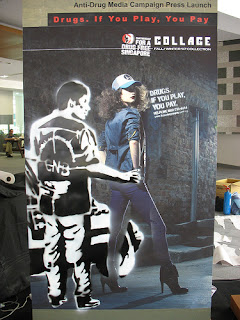 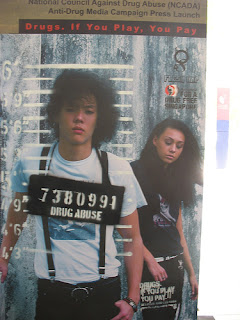 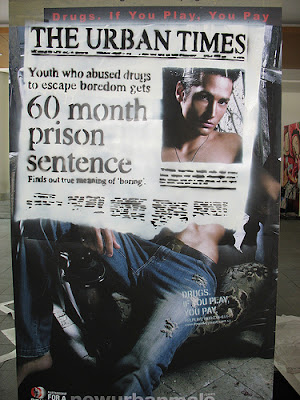 Here's a clip on how a normal looking poster can be pimped up all for a good cause!

All in all, I'd like to say GOOD JOB to NCADA for stepping outside the box and being willing to experiment with novel and creative ways of reaching out to youths. We're a contemporary bunch and the last thing we need are the boring same old messages over and over again in our faces. We all know that drugs are bad, we've been hammered home the message since moral ed lessons in primary school -- we don't need to be lectured, we need to be educated. And educating us, you are -- in a way that catches our attention as well as connecting with us on a personal level.

Well done. I never thought any national campaign would actually wow me -- this is the first (and I hope not the last)!....
Posted by eStee at 10:27 AM

Hi Estee, your post has been featured at The Singapore Daily [singaporedaily.wordpress.com]. Keep blogging!

I wouldn't have noticed anything if not for the mention.

Anyway, I'm more surprised that the organizations would actually approve of the 'defacing' of their image.
It's like associating these brand names with drug abuse...

But then again, I guess it's the bad publicity is good publicity for all these brands.

quite the contrary, i think it shows their support for the anti-drug abuse message -)

Its such as you learn my mind! You seem to know a lot
approximately this, like you wrote the e book in it or something.
I think that you can do with some percent to power the message house a bit, but instead of that, that is magnificent blog.
A fantastic read. I'll certainly be back.
http://pemasaraninternet.webs.com/seo
My weblog pemasaran internet